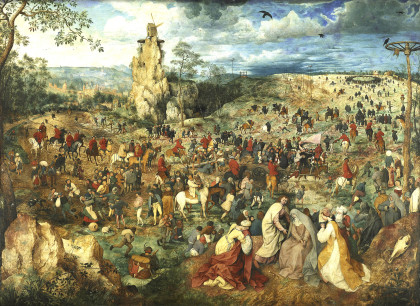 THE MILL AND THE CROSS by MICHAEL FRANCIS GIBSON

is a detailed analysis of PETER BRUEGEL'S WAY TO CALVARY

First published in English in 2001 by Acatos, Lausanne, Michael Francis Gibson's The Mill and the Cross was hailed by the New York Times Book Review as being "as readable and riveting as a first-class spy thriller.”

In 2011, after four years of shooting and an unprecedented amount of postproduction work on the computer, the Polish film director, Lech Majewski, released The Mill and the Cross, his widely acclaimed feature-length film, with Charlotte Rampling, Michael York and Rutger Hauer. See trailer, press comments and other information on www.themillandthecross.com.

This new edition with additional text, (including an excerpt from the script, photos of the shooting and stills from the film), also contains a number details from the painting that nobody seems to has seen before. As Gibson explained, he was looking at some close-up photos provided by the Kunsthistorishes Museum, when he was stunned to discover that a hundred or more original paintings lay concealed inside the larger one. One of these in particular impressed him.

“If you look to the right of the mill on its impropable rock,” he says, “you will find a sunless moor and a little man leaning into the wind and trudging up the hill towards a splash of sunlight at the top. But what took my breath away was the realization that Bruegel had taken the pains to paint in a light rain falling aslant on the moor. At which point I thought to myself, ‘that little rain has been falling up there for close to 450 years, but I may be the first to have seen it since Bruegel set down his brush.' (Publisher's comment; It turns out that the curators of Flemish paintings, who have ample opportunity to examine the painting at close quarters are indeed aware of the falling rain...)

This new edition contains a two-page spread of the whole painting, and 130 details from every part of it, many of which will appear quite as much of a revelation as the rain on the moor.

The book and the DVD aBlueray

version of the film are  now

(the book only on the Spanish site)

ORDER THE BOOK AT A DISCOUNT

At the eStore by clicking on this link

and enter the following discount code:

TULP's eStore is located in the U.S. where the book is printed. The discount code provided above entitles you to a five dollar discount to compensate shipping costs.

The English version of the book is now  on Amazon.com (US).   It will be one all the Amazon sites of   Europe by the end of May.

We also have good hopes that the book will be on sale shortly in the bookshops of the Louvre, the Kunsthistorisches Museum in Vienna and other major museums.

RAIN ON THE MOOR 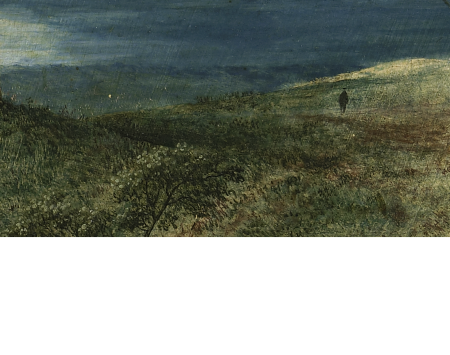