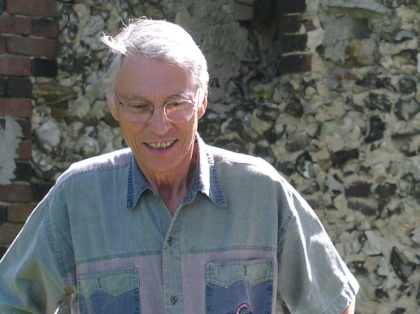 Michael Francis Gibson, was born18 July 1929, inside the American Embassy in Brussels, Belgium, the son of American Ambassador Hugh S. Gibson and his Belgian wife Ynès Reyntiens. After schooling in eight different establishments, six different countries and three different languages (including the Collège Jean de Brébeuf in Montreal and the University of Louvain in Belgium), he settled in Paris in 1958 where he has lived ever since. Married, four children (two of a former marriage).

He translated the Oxford Greek scholar E.R. Dodds' "The Greeks and the irrational" into French in view of its publication by Aubier-Montaigne in Paris in 1963 ("Les Grecs et l'irrationnel"). The anthropologist Claude Lévi-Strauss termed it “one of the key books of the present century.”

That same year Gibson founded the Collège Musical de Trie in the small village of Trie-la-Ville, to the north of Paris. In this private institution the musicologist Antoine Geoffroy-Dechaume, following the lead of Arnold Dolmetsch, whome  he had known as a youth, taught the interpretation of early music (16th to 18th centuries) according to principles laid down in period documents.

The College was visited by such major figures as Yehudi Menuhin, who repeatedly called upon Geoffroy-Dechaume to participate in the Bath festival; Pierre Boulez, who marked the bicentennial of the death of Jean-Philippe Rameau at the Théâtre des Champs Elysées in Paris in 1964 by conducting Geoffroy-Dechaume’s transcription into modern notation of the opera "Hyppolyte et Aricie"; the guitarist and lutenist Julian Bream who gave a memorable concert in the village church; the conductor André Jouve and his wife, the singer Marie-Thérèse Kahn; the harpsichordist George Malcolm, and the pianist Yvonne Lefébure who was a frequent visitor with her husband, the musicologist Fred Goldbeck.

The young English harpsichord-maker, Anthony Sidey, who had just completed his apprenticeship with the Dolmetsch firm in Surrey, opened a workshop in Trie-la-Ville in 1964. Four years later, after the music center closed, he settled in Paris, where he is still working.

In 1969, Gibson was hired as art critic by the International Herald Tribune. He wrote regularly for that paper for the next 35 years. He also published a number of monographs on Peter Bruegel, Marcel Duchamp and Dada, Symbolist art (Symbolism), Paul Gauguin, Odilon Redon and others.

In 1996 Gibson published a detailed analysis of Peter Bruegel’s 124 x 170 cm, 500-character painting, “The Way to Calvary” (Kunsthistorisches Museum, Vienna) under the title "Le Portement de croix de Pierre Bruegel l'Aîné" (Noêsis, Paris). He translated the book into English and it was published under the title "The Mill and the Cross" in 2001 (Acatlos, Lausanne).

In January 2011, Lech Majewski’s feature-length film with that same title (with Charlotte Rampling, Michael York and Rutger Hauer) was premiered at the Sundance Film Festival, in Sundance, Utah. The film is a narrative recreation of Bruegel’s painting which (according to Gibson) evokes the sort of scene that Bruegel himself too often had occasion to witness: the execution of a Flemish Protestant by the militia of the King of Spain.

Writing in Variety on 27 January 2011, Dennis Harvey hailed it as: “An extraordinary imaginative leap, Lech Majewski's "The Mill and the Cross" combines old and new technologies allowing the viewer to live inside the painting—Flemish master Pieter Bruegel's 1564 "The Procession to Calvary," an epic canvas depicting both Christ's crucifixion and the artist's homeland brutalization by Spanish occupiers. Neither conventional costume drama nor abstract objet d'art, this visually ravishing, surprisingly beguiling gamble won't fit any standard arthouse niche. Still it could prove the Polish helmer's belated international breakthrough.”

In 2002, Gibson published "Ces lois inconnues" (Métailié, Paris, in French), an anthropological essay in which he examines what people actually have in mind when they loosely talk of the “meaning of life.” Such “meaning,” he argues, depends on the human capacity to conceive an indefinite goal that is inherent to each culture and is thus held in common by the entire community."

In 2007, under the pseudonym of Miguel Errazu, he published "The Riddle of the Seal", the first volume of a fantasy trilogy¸ "Chronicles of the Greater Dream" (The University of Levana Press, London). The second volume, "The Sleepers of Lethe", appeared in 2010. The third volume,"The Garden of All the Dream," came out in 2012. All three volumes are available on Amazon worldwide.

Central to the trilogy is the question of what is actually happening to the imagination in the contemporary world. The forgotten continentis in which the story unfolds is the homeland of the golden Emblemata or Living Statues. This strange and inexplicable natural/cultural phenomenon, has been produced for thousands of years in the great imaginary continent known, the author claims, "since highest Antiquity as the Third Hemisphere (and more recently as Gondwana)." The trilogy was conceived as a playful variation on the anthropological/philosophical speculation of "Ces lois inconnues", touching upon the part played by the purposeful imagination in the overall process of cognition and the aquisition of wisdom, but also in the shaping the individual person and in keeping society on an even keel. Upon being questioned about the significance of his trilogy, Gibson replied that his theme could be summed up in the words of the philosopher Michael Steinberg: "The pretensions of language have become and obstacle to human life."

Gibson is currently working on the new edition of his Mill and the Cross, abundantly illustrated with newly discovered detail and simultaneously, in collaboration with the Polish documentary film director Dagmara Drzazga (JAZZ-ga), on a documentary film project, The Invisible Bruegel, devoted to the same painting and conceived to reveal these previously undiscovered details to the public. The film is still in the drafting stage.