CHRONICLES OF THE GREATER DREAM

Brian O’Doherty, a critically acclaimed artist, art critic and novelist interviewed Michael Francis Gibson in October 2006. The interview was video-taped. After having prompted a fictional presentation of Chronicles of the Greater Dream, in which Gibson gives an account of his first encounter with Miguel Errazu, Brian O’Doherty proposes to “change gears.”

BO'D: Let's change gears because you, Michael, are actually the God of Gondwana! You are its sole begetter, if truth be known, you are the entire creator of this parallel universe! You are the leader! In your mind and in your brain is this teeming, extraordinary parallel universe which seems to have relationships all the way through, if one reads it, to various events in the world. And human nature seems to be very much part of it, the basics of human nature: the instinct for conflict, the instinct for transcendence, the spiritual hopes, the evil of decline and violence that some of the contrary figures, some of the rather evil people in the book seem to embody. So, wouldn't you agree that it is a parallel universe with lessons, if we wish to find them, for today?

MFG: I'd say you put it very well.  I define it as the Third Hemisphere. And that is something of a topological problem - where is it located?

BO'D: Well, it's like the Lost Atlantis. That’s another world. Now it is a great history and, original, and marvellous and strange and fascinating as your universe is, are there any precedents that influenced you?

MFG: There is Swift, for whom I have a great veneration... I visited his tomb in Dublin recently and read his tombstone there: "Swift has sailed into his rest. Savage indignation there, cannot lacerate his breast."

BO'D:  Well, it’s very sophisticated. It’s very rich in terms of cultural milieu and past, and present and mythology. It’s extremely rich, and I have a fantasy about your fantasy!

BO'D: And that is that if it is received by a large group of young people, they will kidnap you, and they will make you the leader of their cult! 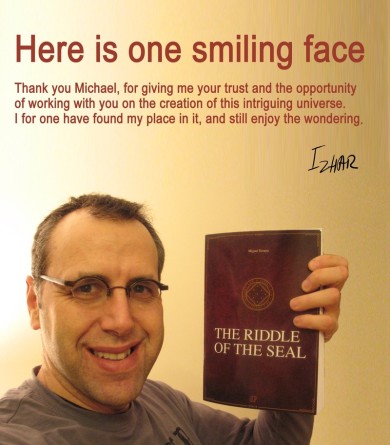 Izhar Cohen the wonderful illustrator of the Chronicles - See http://izharcohen.com/